Scientists have announced yesterday that a collaboration consisting of ETH Zurich, IBM Research, the Interstat University of Applied Sciences Buchs and Airlight Energy is to develop an affordable photovoltaic system capable  of concentrating solar radiation 2,000 times and converting 80 percent of the incoming radiation into useful energy. The system can also provide desalinated water dan cool air in sunny, remote locations where they are often in short supply.

Based on a study by the European Solar Thermal Electricity Association and Greenpeace International, technically, it would only take two percent of the solar energy from the Sahare Desert to supply the world's electricity needs. Unforunately, current solar technologies on the market today are too expensie and slow to produce, require rare Earht minerals and lack the efficiency to make such massive installations practical.

The so-calle "High Concentration Photovotaic Thermal" (HCPVT) system uses a large parabolic dish made from multitude of mirror facets, which are attached to a sun tracking system. The tracking system positions the dish at the best angle to capture the sun's rays, which then reflect off the mirrors onto several microchannel-liquid cooled recievers with triple junction photovoltaic chips each 1x1 centimeter chip can convert 200-250 watts, on average, over a typical eight hour day in a sunny region.

The entire receiver combines hundreds of chips and provides 25 kilowatts of electrical power. The photovoltaic chips are mounted on microstructured substrates that pipe liquid coolants within a few tens of micrometers from the chip to absorb the heat and draw it away 10 times more effectivily than with passive air cooling. 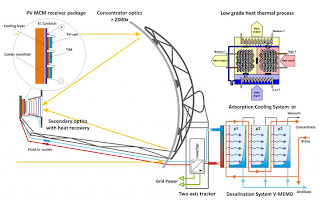 "Reaching high conversion efficiency with a low-cost system is the main challenge in this project”, says Aldo Steinfeld, professor for Renewable Energy Carriers at ETH Zurich and head of the Solar Technology Laboratory at PSI. His group at ETH’s Institute of Energy Technology will develop the optical design of the solar concentrator sub-system. This includes the sun-tracking parabolic concentrator and the matching secondary non-imaging reflector. “Advanced ray-tracing numerical techniques will be applied to optimize the optical configuration and reach uniform solar fluxes exceeding 2000 suns at the photovoltaic cell”, explains Aldo Steinfeld.
The estimated cost per aperture area is below $250 per square meter, which is three times lower than comparable systems. The levelized cost of energy will be less than 10 cents per kilowatt-hour (Kwh).
With the HCPVT packaging approach scientists can both eliminate the overheating problems of solar chips while also repurposing the energy for thermal water desalination and cool air. The 90 degree Celsius water will pass through a porous membrane distillation system where it is then vaporized and desalinated. Such a system could provide 20 liters of drinkable water per square meter of receiver area per day. “The integration of several novel components, e.g. the faceted concentrator, the secondary optics, and the microchannel heat exchanger, makes the HCPVT system unique”, says Aldo Steinfeld.
Scientists envision the HCPVT system providing sustainable energy and fresh water to locations around the world. A prototype of the HCPVT is currently being tested at the IBM Research lab in Zurich. The project is funded by the Swiss Commission for Technology and Innovation (CTI) with 2.25 million Swiss Francs ($2.4 million).
Einde citaat.